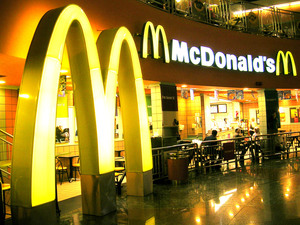 Marion “Mac” Magruder is getting a lot of face time these days. Last evening, he was interviewed on FOX News Channel 10 and today, there he was on CNN’s Lou Dobbs.

He is reacting to the new state employer sanctions law which he says could put him out of business. You might recall Magruder as the Paradise Valley businessman who ran for first vice chair alongside former Gov. Fife Symington, who campaigned for the chairmanship of GOP District 11. The duo, neither of whom attended district meetings, ran unsuccessfully as surrogates for the McCain/Kyl faction, in a well orchestrated effort to wrest control from the conservative leadership of Rob Haney. Haney was reelected by a wide margin.These days, Magruder, who owns 38 McDonald’s franchises, sounds more like a Democrat, as he complains about the effects of the law, which makes Arizona the first in the nation to pass a statewide employer sanctions measure.

“My business, now today, is probably worth about half of what it was yesterday. Why would anybody come here and buy my business with this hanging over their head?” asked Magruder.“All of our employees are documented,” he maintained. “They have driver’s licenses, they own homes and have families, they are documented…..but who really knows?”

Still, Magruder disingenuously contends there aren’t enough legal workers to go around.The Arizona Chamber of Commerce and some business owners oppose the bill, saying it will have dire consequences for the state. The law, which goes into effect January 1, 2008, only imposes sanctions against those who knowingly hire illegal aliens.

McCain…Kyl…Magruder. Hmm?  Wonder if that trail of dots has any connection to the amnesty bill advocacy of McCain and Kyl, and the employer sanction opposition of Magruder? Since Magruder certifies all of his employees are legal, he should have nothing to worry about.

This entry was posted on Wednesday, July 4th, 2007 at 12:46 am and is filed under Arizona Politics, Foolishness, Illegal Immigration. You can follow any responses to this entry through the RSS 2.0 feed. Both comments and pings are currently closed.