Mexico has a border patrol? 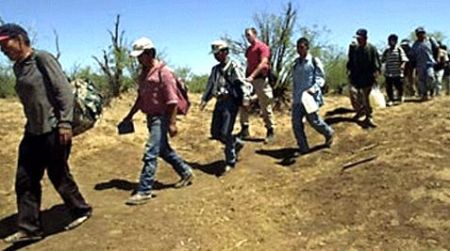 The daily treats us once again to a front page, above-the-fold article on its favored topic: Illegal aliens and their plight.

At first blush, the article appears to convey the message that Mexico has actual border patrol agents, called Grupos Beta, who work in concert with U.S. agents to obstruct the deluge of lawbreakers coming across the southern border.

The initial clue that something is amiss is when they quote Robin Hoover, who runs the Tucson-based Humane Borders, which places water and food stations in the desert to assist the illegal entries.

Then we read there are five agents patrolling the 90 miles of border abutting Yuma County. When they encounter “would-be immigrants,” they hand them cartoon-style guidebooks, giving advice on how to survive in the desert… “ According to the daily, Beta agents hand out water, food and clothing for those who continue north.

The pamphlets and tactics have enraged immigration-control groups in the United States, who accuse the Mexican government of encouraging illegal border crossings. But, writes the reporter, there is little else the Beta agents can do: It’s not illegal in Mexico to cross the border, just as it is not illegal for U.S. citizens to cross into Mexico, so they cannot arrest crossers.

Omitted from this blasé account is the fact that American citizens do not sneak into Mexico, undercut wages of Mexican nationals, march through Mexican cities waving American flags, declare they are reclaiming their homeland, and stay permanently, without obtaining necessary governmental documents.

One plus was the inclusion of this this interesting fact in the sidebar to the article: There was a 70 percent drop in 2007 from 2006 in the number of people spotted trying to cross into the United States in the 90 miles of border across from Arizona’s Yuma County, Grupos Beta agents in that area say.

That decline coincides with the erection of a border fence and increased enforcement near Yuma, where the U.S. Border Patrol reports an equivalent decline in illegal-immigrant arrests.

This entry was posted on Friday, February 29th, 2008 at 1:10 pm and is filed under Deception, Homeland Security, Illegal Immigration, News. You can follow any responses to this entry through the RSS 2.0 feed. Both comments and pings are currently closed.

6 Responses to Mexico has a border patrol?