Grassroots Arizona is anything but: Funded by high rollers with open borders agenda

The story that won’t go away

This could have been titled Tales from the Dark Side, since it has become such an ongoing saga of bitter vindictiveness. However, it not one conservative Republicans should tire of, since it is the destructive Energizer Bunny of Arizona politics.

Last year, The Nation, covered the undercurrents that have brought the intra-party tensions to the current fever pitch. Recently, The Arizona Capitol Times exposed the possible violations and financial filing inconsistencies of the group behind the pro-illegal hiring Wake Up Arizona! and the associated efforts to oust elected conservative Precinct Committeemen who have had the temerity to stand up for the employer sanctions law.

So far the coalition of business owners opposed to Arizona’s employer sanctions law has contributed nearly $375,000 to the deceptively named Stop Illegal Hiring campaign, according to finance reports filed June 30, 2008  with the Arizona Secretary of State.

Wake Up Arizona!  President Marion “Mac” Magruder, a McDonald’s franchisee, heads the group which has promised to topple elected officials and candidates who support the Fair and Legal Employer act known as Employer Sanctions.  That is the reason we are seeing the emergence of privately funded candidates like the previously life-long Democrat Tony Bouie and Jeff Flake’s recruited brother-in-law,  Kevin Gibbons, challenging known conservatives in legislative races.

This is also the reason the so-called Grassroots Arizona (PAC) is working fervently to depose elected district precinct committeemen and county officers and replace them with those favoring open borders and the accompanying cheap labor.

These seemingly benign mailers are arriving at Republican households in districts where conservative precinct committeemen who are on the ballot are being challenged by recruits in a concerted effort to overthrow the longtime party loyalists. In one single district, 45 of 83 precincts are facing such challenges. This is a sample of the reasonable sounding mailers.

Don’t be fooled. Look for the mailers indicating the candidates endorsed by Sheriff Joe Arpaio. 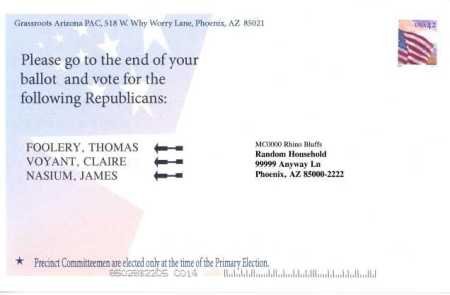 This entry was posted on Wednesday, August 6th, 2008 at 10:48 am and is filed under Any core values?, Arizona Politics, Deception, Elections, GOP Legislative Districts, Homeland Security, Illegal Immigration. You can follow any responses to this entry through the RSS 2.0 feed. Both comments and pings are currently closed.

23 Responses to Grassroots Arizona is anything but: Funded by high rollers with open borders agenda