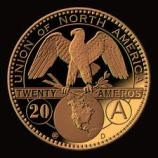 His facts speak louder than her jargon

The newspaper is at it again.  How the leftists at the Periódico de la República de Arizona (Arizona Republic) love to demean Republicans!  The more conservative their views, the more they can expect to feel the pain of a thousand cuts.

The most recent object of derision is state Rep. David Stevens.  Here in the “Political Insider,” Mary Jo Pitzl did her best to make the Sierra Vista Republican (Dist.25) sound like an escaped inmate from the State Hospital’s mental facility.

His “blunder?” According to Pitzl, Rep. Stevens became a “one world conspiracy theorist” when he dared mention the Amero. It’s the “stuff of urban legends,” she mocked in the column.  Ditto CANAMEX, the strategic mega Super Corridor intended to link the United States, Canada and Mexico as part of a plan to create a North American Union along the model of the European Union. It’s been in the works for years and explains the accompanying “comprehensive immigration reform” scheme to allow the vast majority of illegal aliens now in the U.S. to remain under a “guest worker” or “pathway to citizenship” provision. The underlying agenda is a creation of a NAFTA on steroids environment in which workers, trade and capital will be allowed to flow unimpeded within the trilateral North American community consisting of the United States, Canada and Mexico.

Presently, the United States has 84% of the series of highways completed, Mexico is 86% compliant. The Canadian portion was completed in 2007. Rail lines, pipelines and fiber optic telecommunications infrastructure are also part of the plan.

Last week in the Arizona House, responding to legislation to create toll roads connecting the three counties and enforce payment structures through Arizona, Rep. Stevens rose to object, saying, “You may have heard the term ‘Amero.’ I am a citizen of the United States of America. I don’t want to be a member the North American Union.”

That was enough to thrust Pitzl into hyperbole overdrive, dredging up her “one world conspiracy theorist” and “stuff of urban legends” rhetoric.

But on October 11, 2007, Seeing Red AZ wrote that Mexico’s former President Vicente Fox, verified the very same monetary scheme in an interview on CNN’s Larry King Live. Our post at the time was titled Mexico’s former President confirms plans for regional currency. Click on the link and read it. Unfortunately, the accompanying video is no longer active due to copyright issues, but the word-for-word text of the exchange remains for you to see.

For further verification, watch this:

This entry was posted on Monday, April 9th, 2012 at 10:12 am and is filed under Arizona issues, Columnists, Deception, Economics, Global politics, Illegal Immigration, Media, North American Union, Outrage, Those Dems, We have a voice. You can follow any responses to this entry through the RSS 2.0 feed. Both comments and pings are currently closed.