Be sure to log on to “America’s Forum” on newsmaxtv.com and watch the streaming video as Maricopa County Sheriff Joe Arpaio joins J.D. Hayworth.

Integrity, J.D. Hayworth, Media, News, We have a voice |

In remarks to the Hispanic Chamber of Commerce last week, John McCain vowed to fight for amnesty as long as he is a breathing United States Senator.

Breitbart’s Tony Lee reports that McCain also said that if comprehensive immigration reform passes, he would “make sure it is forever called the Edward M. Kennedy immigration bill.” McCain and the late Kennedy previously teamed up with George W. Bush in a concerted effort to pass the McCain/Kennedy amnesty bill.

Unified efforts by conservatives successfully resulted in the defeat of  the measure which would have depressed the wages of American workers while providing no relief from the illegal invasion.

The high-tech lobby, the Chambers of Commerce, and the same groups that previously pushed amnesty are intensifying their efforts this year. Advocates such as McCain’s sycophantic junior Sen. Jeff Flake and committed leftists such as New York Sen. Chuck Schumer and Illinois Rep. Luis Gutierrez fear it may be the last chance for such legislation.

Other speakers throughout the week at Hispanic Chamber events included Wisconsin Rep. Paul Ryan, who declared that amnesty legislation was inevitable, and VP Joe Biden, who actually stated that he believed illegal immigrants were “already American citizens.”

No wonder these establishment stalwarts are falling all over themselves —- dropping the big bucks and encouraging their friends and business associates to do the same —- while signing on with such a stellar friend of American workers: 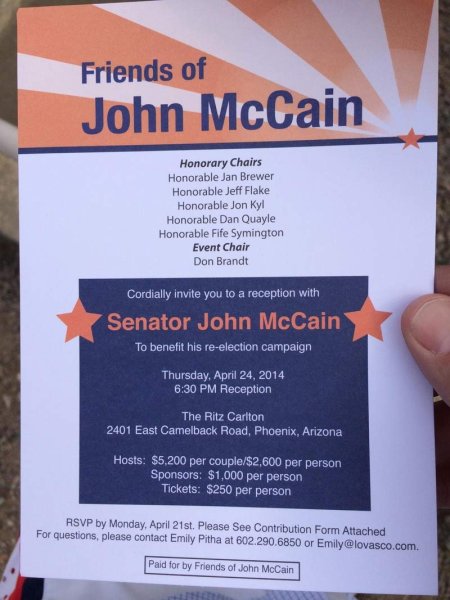 When the leftist Washington Post writes that “influential Republicans” are promoting the draft candidacy of yet another Bush for president in 2016, that news should position conservative Republican’s antenna to high alert mode.

Papa — George Herbert Walker — Bush began the disappointing tradition as 41st president. He famously reneged on his “read my lips, no new taxes” pledge in a 1990 compromise with liberals that cost him a second term. Coming on the heels of two terms of Ronald Reagan, the actions of the former ambassador to China and the United Nations were viewed as a betrayal of Republican ideals.

Bush cut a deal with Democrats who promised —- but never delivered —- extensive budget cuts. The disastrous tax increase that followed led to increased spending, elevated taxes, and gave us the Clinton presidency, which further hiked both taxes and spending.

Then came his amnesty-promoting son, former Texas Governor George W. Bush. As president, “Dubya” rose to the occasion in the wake of the September 11, 2001 terrorist attacks, and implementing tax cuts, but was a mixed bag on other significant issues.

Former Florida Governor, John Ellis “Jeb,” is a Bush too far.  Strongly influenced by his Mexican-born and reared wife Columbia whose father was a “migrant worker,” his border positions raise even greater concern. Watch the two disturbing videos in this post, “Another Bush? Thanks, Jeb, but we’ve had enough,” for an idea of his stance. It’s not much of a surprise the liberal Washington Post is writing about him being “drafted” for a presidential run.

Waiting in the wings is Jeb’s 37-year-old lawyer son, George Prescott Bush (known as “P”). A lawyer married to a lawyer —- in the tradition of the Clinton’s and Obama’s —- “P” has already ignited his political career with his recent election as Commissioner of the Texas Land Office —-  and is a Bush even further.

The cry of “Uncle” has its roots in asking for deliverance or mercy, usually interpreted to mean “Enough!”

Say “No” to ‘Noah’ — Green politics minus God

No mention of God in the entire two hour movie

Breitbart News’ Senior Editor-At-Large Ben Shapiro has done a masterful job in his review of the newly released film, Noah —- widely anticipated as a family film with a rich Biblical morality factor.

If you’ve been planning on taking the family and dropping more than a few bucks on tickets, Shapiro’s commentary, 9 Problems with Aronofsky’s ’Noah’ is a worthy read.

The traditional Biblical morality epic has been turned on its ear, with fanciful dramatic fabrications by director and co-writer Darren Aronofsky, an admitted atheist. The concept of sin has been transformed into destruction of the environment and animals. Further, Noah and his family are unrecognizable as the righteous beings chosen by God, as portrayed in the Biblical account.

The weather is ideal.  Plan a bike ride. Go on a picnic. Plant a tree. Take a hike — away from Noah.

The Periódico de la República de Arizona (Arizona Republic) is making promises, and are they ever doozies! The newspaper vows it will expand its coverage by “roughly 70” additional pages a week —- with feeds from USA Today, the stallion in the Gannett stable.

The Virginia-based newspaper’s circulation including freebies distributed by hotels nationwide is said to be the widest in the U.S. and points beyond. The hallmark of USA Today is that it is written at a fifth grade comprehension level, using bright colors, with heavy emphasis on trends, film reviews, celebrity coverage and travel, with a hard focus on sports.

USA Today isn’t for newshounds. Think of it as the People magazine of newspapers.

The Arizona República employs a novel approach in abandoning its news reporting duties by saying turning most of the work over to USA Today allows it to “focus it’s resources more fully on local content.” The front section will be merging compactly with the Valley section. But not to worry. The Republic is “adding pages on dining, weather, state history and moments that make us uniquely Arizona.” That should satisfy even the most demanding readers seeking information.

Though the daily already relies heavily on AP, Politico, and ASU journalism students, readers are told this is a reinvention of news in response to their requests, and this new format has generated positive feedback in other market launches where Gannett has initiated it.

So as the state’s newspaper of record opts for ever more fluff and less substance, expect it to use its fading energies to concentrate on hammering Republicans, with a specific emphasis on conservatives. After all, the 2014 election cycle is upon us.  It’s quite a downhill slide for a  publication that was begin in 1890 as the “Arizona Republican.”

Seeing Red AZ has frequently covered the ever-shrinking,  dual agenda, far leftwing Arizona República.  Arizona Republic: Compressing the press was posted last August. It contains links to three other reports on the distressed newspaper. Rather than considering this dubious Gannett lifeline, the newspaper could resort to reporting with integrity, instead of crafting news. It could stop insulting its few remaining readers. It might survive. But the daily prefers to fade to black spewing venom with its biases intact.

Gannett’s 100 page 2013 annual report requires a CPA and lawyer to decipher “the company” (as it refers to itself) code.  The New York Stock Exchange is easier to read. Gannett continues to tumble.

Any core values?, Beating the drum, Deception, News, Those Dems |

Back in November, the National Republican Congressional Committee (NRCC) announced its first round of ‘On the Radar’ candidates in advance of the 2014 elections. ‘On the Radar’ is the first of three levels of the Committee’s ‘Young Guns’ program. The group provides candidates and their campaigns the tools they need to run successful, winning campaigns against their Democrat opponents. At the time, the national list of 36 included four Arizona Congressional candidates.

The most recent roster was just released with the NRCC announcing that 17 of those on the original list have been promoted to ‘Contender’ status. Only one Arizona Congressional candidate —- Martha McSally —- has been advanced to the next tier.

The program requires its candidates to work towards specific goals and meet benchmarks throughout the year to ensure their continued participation. In the 2012 election cycle, the program impressively helped elect 35 new Republican members to the 113th Congress.

Andy Tobin’s predicament might be tied to the fact that the “specific goals” he’s been working on aren’t in the district he‘s campaigning from, or even the state of Arizona. Tobin is busy focusing his attention on Mexico. How many voters he intends to sway there is anyone’s guess, but after being dropped like a hot rock, it’s clear the RNCC isn’t buying his tactics.

Less than four years after Indiana became an early adopter of the national Common Core education standards, Gov. Mike Pence signed legislation Monday making Indiana the first state to opt out of the controversial school guidelines, according to this report in the Indianapolis Star.

Republican Sen. Scott Schneider, the bill’s author said, “This voids Common Core, and we are starting the process of writing new standards. Eternal vigilance of parents is still needed, and I encourage you to do so.”

“SB 91 is a strong statement that we are moving forward, moving away from Common Core, protecting Indiana sovereignty and student data,” said Schneider.

Even liberal New York has lost confidence in the scheme.

Ohio, Oklahoma, South Carolina, and Kentucky —- the first state to adopt Common Core before the “standards” were even publicly released —- all have measures moving through their state legislators to at least halt, if not completely abolish the so-called standards.

But in Arizona the deception continues, as John Huppenthal, Arizona’s Superintendent of Public Instruction has changed the highly charged name of his Obama-influenced vision for Arizona classrooms from “Common Core” to “Arizona College and Career Ready Standards” —- in the mistaken belief we won’t notice.

Fortunately, we have a choice. Diane Douglas is the undisputed conservative running for state Superintendent of Public Instruction. Check out the key words across the top of her website. They’re sure to brighten your day.