Just like clockwork — every six years — perpetual candidate Señor Juan McAmnesty, who will be 80 by Election Day,  swerves into campaign mode, talking tough on the border.

Now he’s not merely trying to sound conservative, he’s admitting he’s in “the race of his lifetime,” as he refers to his 2016 campaign in his most recent email soliciting funds.

“Right now,” McCain whines as he ignores his conservative Primary opponent and leaps directly to the General Election, “my opponent, Ann Kirkpatrick, is in California, hobnobbing with big money, left-wing Hollywood donors as part of a closed-door conference put on by liberal fundraising network Democracy Alliance.” Then in the mother of all ironies he says,“ You see, Congresswoman Kirkpatrick has a habit of putting her liberal crony friends ahead of Arizona.”

The Daily Caller reported John McCain and Jeff Flake have the distinction of being neck-in-neck for the least popular U.S. Senator prize. Few Arizonans were surprised by the revelation.

We should never forget this is who they actually are — most comfortable with the most liberal of Washington insiders and laughingly backing their issues. Here it was amnesty: 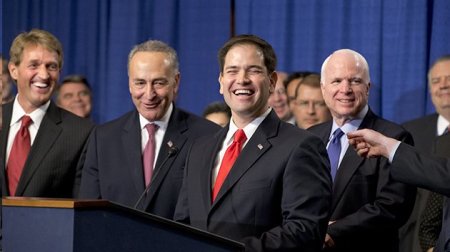 This entry was posted on Thursday, April 14th, 2016 at 8:17 am and is filed under Any core values?, Arizona issues, Deception, Elections, Illegal Immigration, Jeff the Flake, McStench, Those Dems. You can follow any responses to this entry through the RSS 2.0 feed. Both comments and pings are currently closed.

9 Responses to McCain back in campaign mode: tacks right