Jeff Flake: Reaping what he has sown 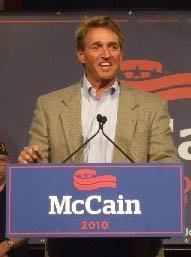 As he gears up for a reelection bid, Jeff Flake is meeting with opposition — not from Democrats — but from within the Republican Party. A first term U.S. Senator, who previously spent 6 terms in the U.S. House — after reneging on his own term limits pledge made during his first campaign for Congress in 2000.  Flake ran as a citizen legislator, vowing that if elected, he would serve three two-year terms. But the heady atmosphere of Washington, DC became irresistible for Flake. Redistricting made him immune to major challengers.

Flake’s refusal to endorse Republican presidential nominee Donald Trump was followed by his repeated declaration that he would not vote for Trump. In fact, he haughtily declared Trump “can’t and shouldn’t win.”

Junior Senator Flake’s anti-Trump fixation closely followed his mentor John McCain, still seething over his 2008 presidential drubbing. His rage is even more inflamed by the fact that Donald Trump, who has never held political office, rode the wave of populism to the White House this past fall.

Since Trump’s ascension McCain has hammered him mercilessly, even referring to him as a “dictator.” In a move of outlandish proportions, McCain has tried to link Trump to Russia and charged Russian “hacking” of the election was an “act of war.” Russia did not intrude on our election. But the Wikileaks information damaged his scandal-plagued friend Hillary Clinton irreparably. McCain had previously referred to her as a “rock star” he could support.

What the duplicitous hypocrite McCain neglected to mention was his own request for campaign donations from Russian officials — which they turned down. The Gateway Pundit’s Jim Hoft has the full story, including shocking, verifying links.

Jeff Flake was originally shoehorned into the senate seat through the diligent efforts of retiring Sen. Jon Kyl and John McCain.  Even with their assistance he barely squeaked into office by a mere 3 percentage points.

There is not a hair’s breadth of difference between Flake and McCain. They both relentlessly push amnesty for illegals, maintained close relationships with then-President Barack Obama  — Flake traveling with Obama to Kenya and  Cuba, and playing as a regular in the White House basketball games. Flake has colluded with liberals on gun control. McCain advised Obama on forging his legacy. Flake met with Democrat Merrick Garland,  Obama’s Supreme Court pick and actually opined that it was time to start thinking about confirming him.

“So you think you know Jeff Flake? Think again,” was posted July 2016. Knowledge is power.

This entry was posted on Thursday, February 23rd, 2017 at 8:52 am and is filed under Any core values?, Deception, Duplicity, Illegal Immigration, Jeff the Flake, Judicial, McStench, Second Amendment, Those Dems. You can follow any responses to this entry through the RSS 2.0 feed. Both comments and pings are currently closed.

13 Responses to Jeff Flake: Reaping what he has sown