Disgusted with Maverick McCain? Obama’s not 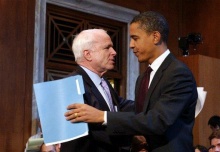 Politico is reporting on the “new power triangle.” Think of it as Obama’s McDream Team.

The article exposes the John McCain Arizonans know too well and conservatives hold in total disdain. It begins: “Barack Obama, to hear his advisers tell it, has finally found The One he has been looking for: John McCain.

“We have been looking literally for years for someone we can cut deals with, and finally someone has stepped up,” a White House official said. West Wing aides say they now talk with McCain roughly every other day.”

McCain ‘stepped up” because that’s who he is.

Widely regarded as an Arizona carpetbagger in 1982, John McCain had to be persuaded to run as a Republican during his initial House race in what was then Arizona’s First Congressional District. McCain hoped to succeed steady Republican U. S. Rep. John J. Rhodes, the highly respected U.S. House Minority Leader — elected to that post by acclamation.  A popular conservative, Rhodes served the district for 30 years until his retirement.

Squishy McCain was informed by powerful state Republican Party leaders that their support would be contingent upon his party commitment.  He acquiesced and won. But his alliances have always been in left field. McCain was able to come to terms with his deceit by reconfiguring himself as “a maverick.”

This entry was posted on Wednesday, July 24th, 2013 at 10:17 am and is filed under Arizona Politics, Hope and Change, McStench, News, Those Dems. You can follow any responses to this entry through the RSS 2.0 feed. Both comments and pings are currently closed.

16 Responses to Disgusted with Maverick McCain? Obama’s not