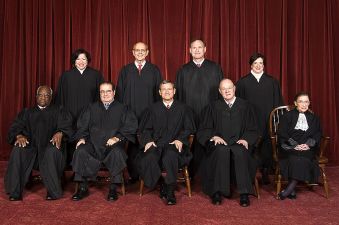 The recent report that Supreme Court Justice Ruth Bader Ginsburg had a heart stent implanted to clear a blocked artery during the court’s current session is more than just an item of passing interest. The 9-member court hears its next round of oral arguments on Monday.

The 81-year-old Ginsburg, a radical liberal (video) who has suffered multiple and serious health problems, is emblematic of the aging High Court bench. Ginsburg has yet to top the longevity of Justice Oliver Wendell Holmes, Jr., who was on the court from 1902 to 1932 and was 90 when he finally retired, but she’s within spitting distance of the record.

Her age and ill-health point to a serious situation as Barack Obama still has two years to stack the Supreme Court. He has been resolutely at work doing so throughout his tenure with the 13 federal circuit courts, which handle upward of 60,000 cases a year —- compared to the Supreme Court’s fewer than 100 cases. He has diligently created Democrat majorities on the courts that function as mini-supreme courts since they establish precedent on previously unaddressed issues in their circuits, and have the last word in nearly all of the cases that come before them. Not only has Obama appointed leftist ideologues, but young lawyers who will serve for many years. Currently, he has seven circuit vacancies to fill.

Now with Republicans in control of the Senate for the first time since Barack Obama took office, he should find it harder to appoint left-wing lawyers to judgeships. Since he took office in 2009, the number of circuit courts with Democrat majorities has increased from one to nine. Whether he compromises on some of his nominees, including any to the Supreme Court, may depend on the willingness of the new Republican majority to engage the president on judicial philosophy.

Terry Eastland, an executive editor at The Weekly Standard has written a fact-filled two-page review of the subject titled, Obama’s Makeover of the Judiciary. This is an important article that should not be missed. Eastland addresses the issue of the all-important willingness of the new GOP majority Senate to slow the march of liberal judges onto the courts.

The Heritage Foundation provides an overview of the cases on the U.S. Supreme Court’s 2014-2015 docket. The Court’s argument calendar can be accessed here on the Supreme Court’s website.

Kudos from the Phoenix New Times

Okay. We can take it.  It’s all in fun, after all.  Or is it? At any rate, the bizarro-world* leftists at the Phoenix New Times tabloid have awarded Seeing Red AZ the “Best Right-Wing Blog, 2014.” We are even credited as a valuable resource “for reporters and researchers.”

They got us right on our view of John McCain, but skewed the facts on nearly everything else, as was doubtless their intent. We missed the issue in which the award was initially given since the publication is not on our regular reading list.  Still, we take a deep bow and emulate director James Cameron, hooting at the academy awards he was “King of the World.” Cameron simply omitted the all-important two words, “blog” and “Arizona.”

Thanks, Phoenix New Times. Perhaps you‘ll learn a thing or two as you venture into that “journey into darkness” with us. Stranger things have happened. Prior to seeing the light, conservative icon Ronald Reagan had once been a Democrat union leader.

* New Times’ description of the mindset of our readers.

Taxpayers on the hook for $2 trillion+ funding Obama’s amnesty

The Heritage Foundation’s expert on welfare and entitlement spending, Robert Rector, reports that illegal aliens who receive amnesty and work permits through Barack Obama’s executive actions will draw $2 trillion over their lifetimes in taxpayer-funded government services. Rector  based the figure on estimates that 4 million* illegal aliens will benefit from the actions and will live an average of 50 years.

“The net cost —- which is total benefits minus total benefits paid in —- of the amnesty recipients I estimate will be around $2 trillion over the course of their lifetime,* Rector told Breitbart News. “What [Obama] is doing is he is putting these 4 million people —- who on average have a 10th grade education —- into the Social Security and Medicare programs.”

In May 2013, Rector estimated the costs of the John McCain and Jeff Flake-led Gang of Eight’s 844-page amnesty bill, S. 744  to be $6.3 trillion. He applied that methodology to Obama’s executive amnesty. Rector looked at how much the average beneficiary would earn in wages over their lifetimes and then calculated how much they would draw in taxpayer benefits.

“Given their expected earnings, from someone who has a 10th grade education, they will draw about three dollars worth of benefits out of those programs over their lifetimes for every dollar they put into them. But the overall cost in outlays will be around a trillion dollars for those programs alone,” Rector said. “The bottom line to understand this is you are taking millions of people with a 10th grade education and giving them access to the largest entitlement and welfare system in the globe.”

Carrying the deceptive title, “Border Security, Economic Opportunity, and Immigration Modernization Act,” S.744, clearly an amnesty bill, was approved in the Senate June 27, 2013 by a vote of 68 to 32, with the disappointing support of 14 Republicans. The Republican-led House did not pass the amnesty proposal. Check out the actual roll call vote to see how the individual senators “represented” their constituents.

* Editor’s note: Robert Rector uses 4 million illegal aliens in his cost analysis. Other reports put the number well in excess of 5 million, which would up the ante on the $2 trillion figure. Here on the White House website, the figure is acknowledged as 11 million as Obama sets forth the unenforceable provisions of his unilaterally imposed scheme which bypasses congress as he spits in the eye of the U.S. Constitution.

2014 Thanksgiving message to our readers

We take a moment to reflect today on the many blessings we enjoy as citizens of this great land, and wish the abundant bounties of this uniquely American holiday to each and every one of our readers.

Do yourself a favor and read this inspiring Thanksgiving Proclamation issued in 1789 by President George Washington. The first paragraph references God a total of five times:

“Whereas it is the duty of all nations to acknowledge the providence of Almighty God, to obey His will, to be grateful for His benefits, and humbly to implore His protection and favor; and Whereas both Houses of Congress have, by their joint committee, requested me to “recommend to the people of the United States a day of public thanksgiving and prayer, to be observed by acknowledging with grateful hearts the many and signal favors of Almighty God, especially by affording them an opportunity peaceably to establish a form of government for their safety and happiness:”

Read it in its entirety here. We recommend this inspiring proclamation for reading aloud at your dining table today. It’s a gift your friends and family will long remember.

Faith, Heritage, Integrity, We have a voice | 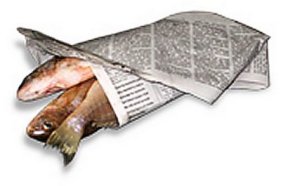 Under the mild headline “Ferguson protesters rally across U.S. for 2nd day,” the increasingly erratic and radically leftist Arizona Republic newspaper boldly puts its bias on display, with this opening sentence: “People protesting the Ferguson, Mo., grand-jury decision took to the streets in some U.S. cities for a second day Tuesday, even as others were still cleaning up vandalism from the night before.”

How do such savage acts of feral criminality morph into rallies?  The Republic employs the same understatement technique as U.S. Attorney General Eric Holder, America’s chief law enforcement officer, who blandly said he was “disappointed” by the violence.

What the Republic tamely calls “vandalism“ is blatant criminality that began in Ferguson and has run rampant through American cities with large black populations. The looters and arsonists are criminals who conveniently used the grand jury decision not to indict white police officer Darren Wilson in the fatal shooting of black Michael Brown as an excuse for violent acts against innocent business owners —- devastating their years of sacrifice to create a livelihood for themselves and their families.

The small-statured convenience store owner who 6’4” and nearly 300 lb. Brown shoved aside during his strong-arm robbery (video) just prior to the shooting, had his business and inventory destroyed during the riots.

Through its choice of descriptive words, the Arizona Republic gives its explicit approval to the acts of brutality perpetrated by gangs of thugs. The decision makers at the daily fish wrapper should be ashamed.

April Fool’s Day is still months away, but the gags keep coming

The U.S. Department of Justice recently released a letter* citing 10 legal academics at colleges across the country defending Barack Obama’s imperial executive action —- bypassing congress —- which grants amnesty to millions of foreign nationals who have illegally entered the United States.

But while the DOJ touts these professors’ prominence, their neutrality is certainly questionable.

In the letter, the legal scholars say they don’t always see eye-to-eye on presidential power and immigration policy, but that they “are all of the view that these actions are lawful.”

Of the 10 letter signers, seven are registered Democrats. Two live in states that don’t release party affiliation, but they both donate exclusively to Democrat candidates. The lone Republican, Eric Posner, is also an exclusive Democrat donor and has repeatedly written that Obama can literally “do whatever he wants” when it comes to executive authority.

Three of the lawyers work at the University of Chicago, where Obama taught constitutional law.

Another, Lee Bollinger, is the president of Columbia University, where Obama did his undergrad work. Bollinger is also directly involved in the effort to make Columbia the site of Obama’s presidential library.

Duke University professor Walter Dellinger, another who signed the letter, served in the Clinton administration and has an ongoing friendship with U.S. Supreme Court Justice Elena Kagan, who was nominated by Obama.

Finally, there’s Laurence Tribe, a mentor to Obama at Harvard Law School, who called him “the best student I ever had and the most exciting research assistant.” He also campaigned for Obama.

Take time to read it. Knowledge is power.